You and your dog and can give some love to Nepal’s dogs!

I am creating a series of custom oil paintings of dogs and donating all funds raised to Animal Nepal, the largest provider of care to Kathmandu’s community dogs.

If you donate $550, I’ll paint a portrait of the pup who brings you comfort, love, and a good dose of silliness.  Through your donation, you’ll help vaccinate, spay/neuter, provide emergency medical care and find homes for Kathmandu’s street dogs.

You send me $550 and 2-5 photos of your dog. We schedule a phone conversation so you can tell me stories highlighting your dog’s character and lovable quirks.  I then design and complete an original oil painting on stretched canvas (16×20” or 18×18”). When it is finished, I will mail (U.S. only) or hand-deliver (in Santa Barbara) the painting to you.  100% of your donation will go to Animal Nepal.  I’m donating my time and painting skills, as well as paying for the canvases, paints, shipping, and any fees to wire funds.  I will be in Nepal September 10-24, 2016, and will personally deliver any donations made before that time.  Donations made after September 24th will be wired to Animal Nepal.

You give me the creative freedom to paint your dog in my own style, and permission to share your dog’s photos and story, and images of the painting I create.  I intend to paint at least 10 dog portraits for this series, but will stop collecting donations if/when I’m no longer having fun doing the painting project.

Interested in having a portrait of your dog painted and in helping Nepal’s community dogs?  Email me at joylynndavis@yahoo.com to get started. 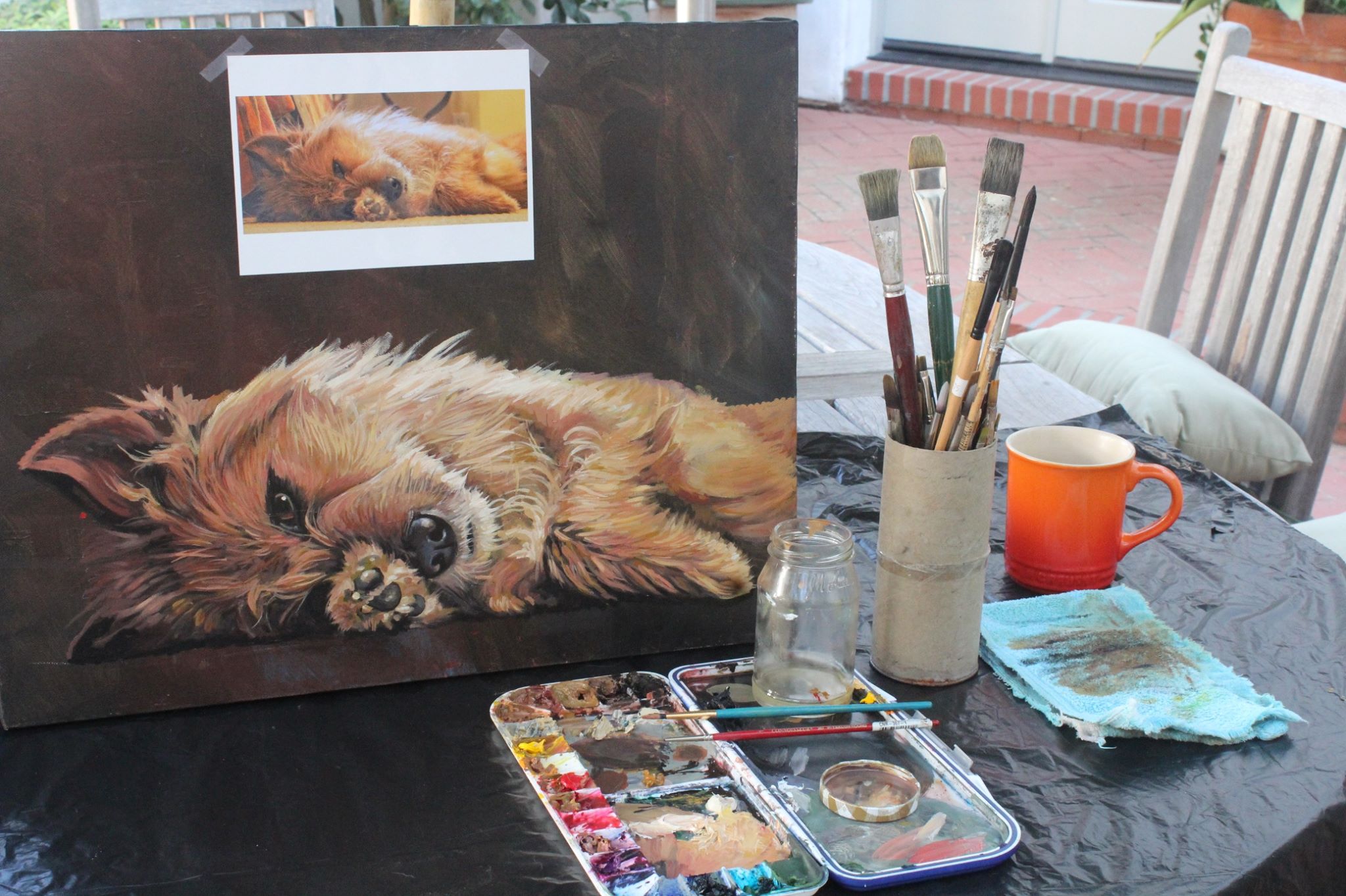 Animal Nepal has been rescuing injured dogs since 2003.  In 2009 they began a community-based stray dog rescue and release program aimed at created a healthy and reduced stray dog population in the Kathmandu Valley by vaccinating for rabies, reducing the number of births through sterilization, rehabilitating injured dogs, setting up a help line, promoting adoption, and educating local communities.  They also have a dog sanctuary in the southern part of the Kathmandu Valley.  Learn more about their programs for dogs here on their website.

I lived in Nepal 2012-2015, while working on a project documenting community response to the theft of sacred stone sculptures from the Kathmandu Valley (rememberingthelost.com).  I first met Fox in 2013 outside a market in Patan, just south of Kathmandu. On a hot, sticky monsoon day, I had bags of groceries slung across my shoulders and was cursing and struggling to unlock my bike when I felt something lean against my thigh.  I looked down to find his fluffy face looking up at me.  I set down my bags and sat on the pavement to cuddle him.  He was tall for a street dog, and gentler than most domestic dogs I’d met.  When I cycled away, I couldn’t stop smiling.  After that day, I went out of my way to visit him whenever I was in his part of town.

A year and a half later, I noticed he seemed to be tired all the time, lethargic even.  He was sleeping in the middle of the road, unable to get up, wag his tail, or even keep his eyes open.  A friend agreed something was wrong.  A local vet diagnosed him with canine ehrlichiosis and explained that he wouldn’t have made it much longer without care.  He had a fever, anemia, and dehydration.  Five days in a row, I set him on the backseat of taxis and friends’ cars and brought him back for injections of antibiotics and IV fluids.  On the fifth day, the vet put 40 pills in my hand and announced that he would need 20 additional days of antibiotics, twice a day with food.  I was flabbergasted.  How could I manage?  He lived on the streets and I was busier than ever, preparing for the big exhibition of my 5-year art and research project.  I accepted my fate and began a routine of cooking water buffalo meatballs and carrying them around with me in a container in my laptop bag.  Twice a day, I’d cycle over and whistle.  He’d come running with his pack of dogs behind him.

A few days before he was done with his course of antibiotics, disaster struck.  A 7.8 magnitude earthquake rocked the city, leveling temples and homes, and taking the lives of thousands.  I couldn’t find him for a couple days, but when I did, he was obviously stressed.  He nuzzled into me frantically, pushing his head into my belly and legs, knocking me over.  And he was hungry.  From that day on, he followed me, grinning up at me while running alongside my bicycle, sitting and swishing his tail outside of the gate of my house. 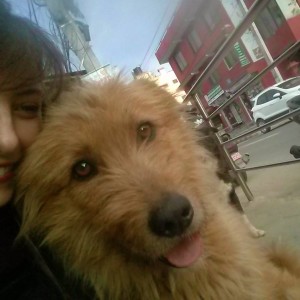 In the weeks after the earthquake, the aftershocks kept coming and each one made our hearts race and made us run into the streets.  We experienced hundreds of aftershocks, including a 7.4.  There was a shortage of fuel and water and nearly everyone slept in makeshift tents outside, away from the cracked and crumbled buildings.  My home was damaged too, so I slept outside initially, later indoors but under a table and fully clothed with shoes on in case I needed to run.  I worked long hours as part of UNESCOs earthquake response team.  It was more stress than I had ever known.  The dog that adopted me did what he could to get me to relax.  Every night I’d cycle to his neighborhood, sit in the street with him, and bury my fingers in his warm fur, closing my eyes to forget the images of crumbled buildings.  I daydreamed of adopting him, then was heartbroken to learn it was going to cost over $2,000 to get him to California.  My friends and family responded with generosity I’ll never forget.  They raised the money and offered to host him until I was settled in Santa Barbara again.

We’ve had a big adventure – in Nepal and now Santa Barbara.  He’s my first dog and I’ve had to learn his language, his needs, his quirks.  He’s been patient while I’ve struggled to teach him what is expected of him here.  In the beginning his separation anxiety was severe.  When I left the house, he crooned like Frank Sinatra.  He shredded the miniblinds like a velociraptor.  In one attempt to find me, he jumped off the roof.  Thankfully, he doesn’t do those things anymore. He’s become a great backpacking companion, hiking with his little doggie backpack.  His smile charms people wherever we go.  He’s gentle and sweet with my friends’ kids.  He’s my scooter copilot, riding in the sidecar and sometimes humoring me by wearing his googles.  But best of all, every day when I get back from work, he always wiggles and prances at my arrival. 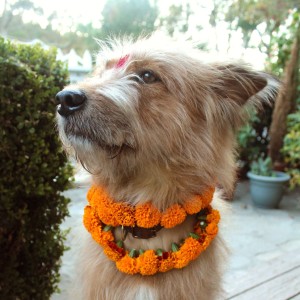 I know all of you with dogs know exactly what I’m describing.

I’m grateful for the generosity my friends and family showed Fox and I after the earthquake, and I’m inspired by the work Animal Nepal does.  I’m doing this project to acknowledge my gratitude by sharing my talent as a painter, while also raising money for an organization doing good work in Nepal.  And, of course, this is a way for us to share our love of those furry, feisty, silly mutts, and to thank them for the joy, companionship, and humor they bring us. 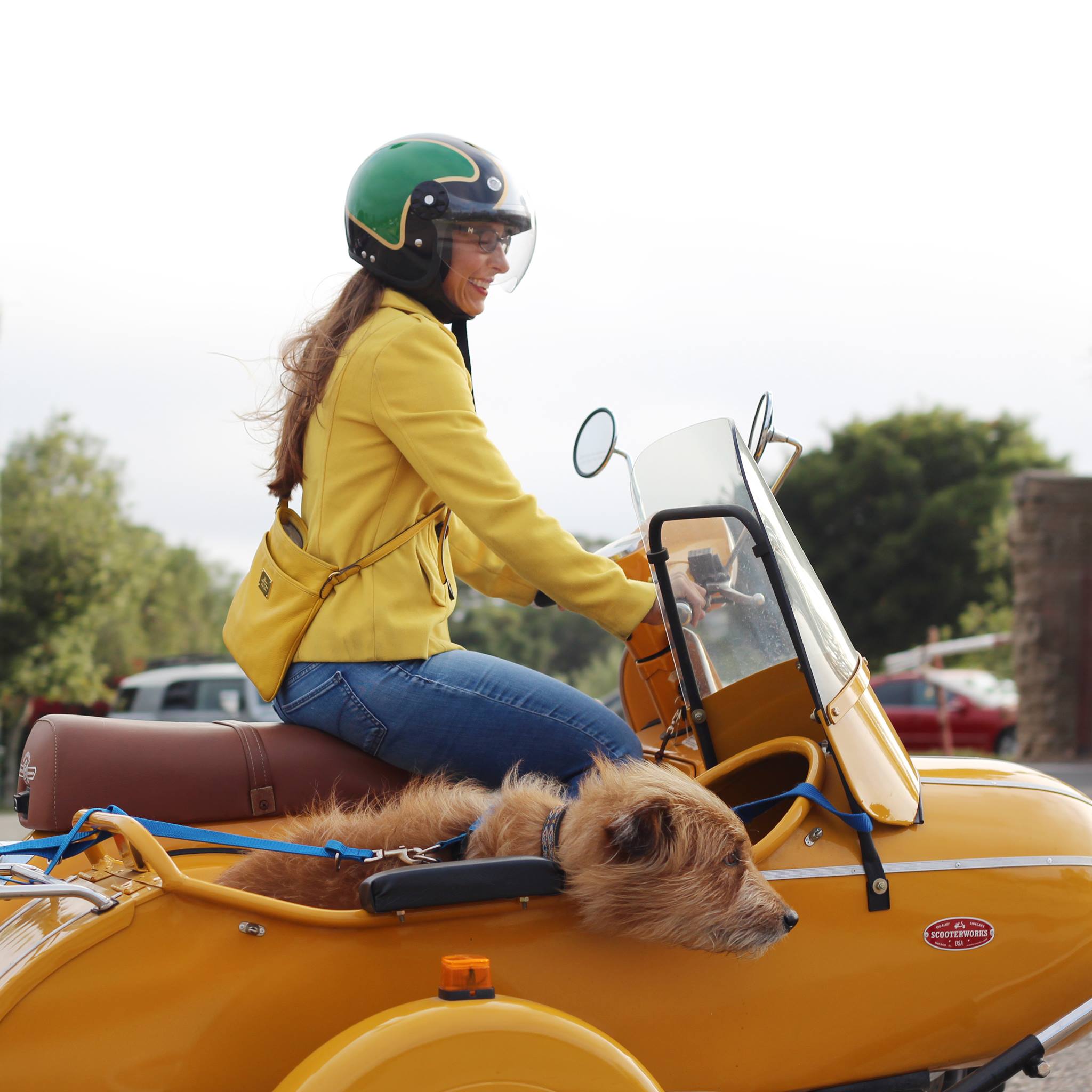